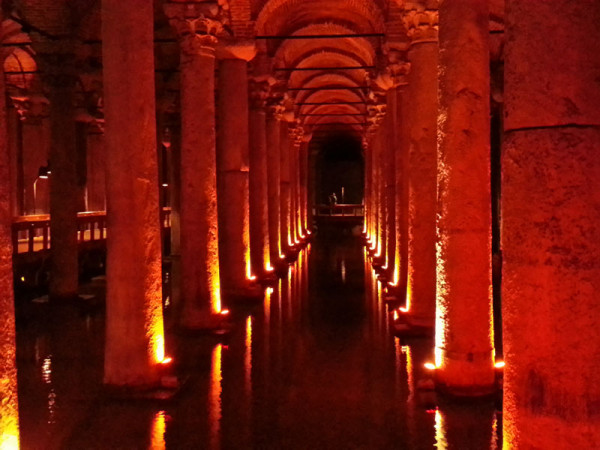 Basilica Cistern is located in old town of Istanbul. Basilica Cistern  is a must for every tourist on the travel list.Therefore, Basilica cistern is one of the most visited places in Istanbul such as Hagia Sophia, topkapi palace and blue mosque. For this reason, entering the Basilica cistern takes a lot of time because of very long line. For  Solution of this problem , we highly recommend you to join Daily tours which is guided by Offical License tour guide. Because License tour guides and their group have priority to buy tickets and entering Basilica Cistern.

Click link to learn information about Hipodrome of Constantinople

Basilica Cistern , which was called Yerebatan Sarnıcı ( Literally means cistern sunken under ground . Basilica Cistern was constructed by Byzantium emperor Justinian the great , founder of Hagia sophia museum, in 6 th century A.D. That’s why it was called Basilica Cistern. Because Basilica ( Basilius) name only  had been used as a first name of Building which was constructed by Roman emperial. For this reason, Ceasar ,the most famous emperor of the Roman Empire,  is mentioned as Basilius Caesar in inscriptions

Like the top of the ground, underground of Istanbul is also a great. More or less 100 diferents cisterns same like Basilica cistern are located in different parts of Old town of Istanbul. According to rumor, there are only forty cisterns under the topkapi palace. You can spend at least one day. While traveling to Istanbul, you can spend at least one day exploring the jewels under Istanbul. As daily tours istanbul, we are sure that this will be an extraordinary experience.

We want to do a list of Undergroud Cıstern Of Istanbul what we know  . Of course, we know that this list does not cover all the cisterns of Istanbul.
We continue to learn in life. we will share the new cisterns with you as we discover them